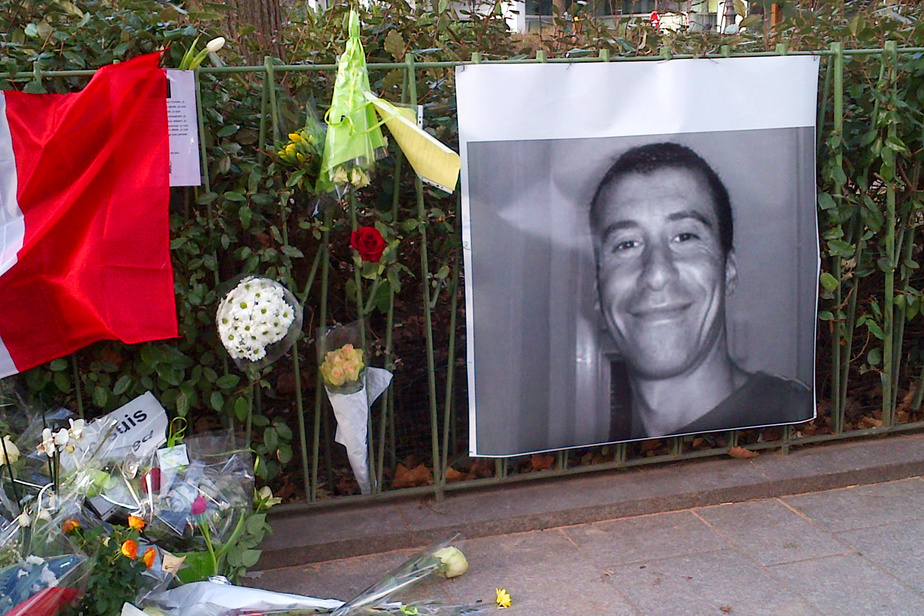 (Paris) “I would never have liked to have seen this video”: At the trial of the attacks in January 2015, Ahmed Merabet’s relatives testified on Monday, five years after the police officer’s murder, including the police, of their anger and grief. He filmed them Execution went around the world.

Not a day, not a night without her thinking back to the terrible images of the scene. “I’m obsessed with it,” admits Ahmed Merabet’s older sister Nabiha at the head of the special court in Paris.

“This tragedy broke our family […] We try to grieve, to move forward. But at the same time every year it is the same: we check this video and hear his voice, ”continues this health officer with white pants and black tunic.

On January 7, 2015, Ahmed Merabet, a 40-year-old peacekeeper, was attacked by the Kouachi brothers while trying to hunt them down on Richard Lenoir Boulevard just minutes after the bloody attack on Charlie.

He was lying on the floor after being hit by an initial shot and had been brought into play by the younger kouachi, Chérif, who had reached his peak. “It’s okay, boss,” he’d said to the terrorist, hands in the air, palms open. The latter had shot him cold in the head.

“My brother was French, a practicing Muslim. He defended the values ​​of the republic and was cowardly murdered during his duty, ”Nabiha Merabet recalled on Monday,“ disgusted ”by the cowardice of the Kouachi brothers, but also by the broadcast of the video about the attack.

These images, captured by a local resident, were posted on social networks minutes after the attack before being withdrawn. But non-stop news networks picked them up and showed the public the execution in all its brutality.

“How can you broadcast a horror video like that?” “Adds the forty, angry with” the chains that send and re-send it every year “.

The shock was unbearable for the victim’s other sisters too.

“This video will never be erased from my memory,” Fouzia confides in a voice full of emotion. “Since I’ve seen this video, I can’t stand hearing the word ‘cook’,” adds Mariam, the youngest of the siblings.

A huge image of Ahmed Merabet in a white outfit is projected on the screen in the back of the room. “It was the day he graduated: he was proud to be a peacekeeper,” says Nabiha Merabet with tears, referring to his brother’s characteristics.

The policeman, originally from Livry-Gargan in Seine-Saint-Denis, has become the “pillar of the house” since his father’s death, always looking after “others”, describes his entourage. Two days before the attack, he had just been admitted to the judicial cop’s competition exam.

“Get up before you”

“Ahmed was very honored, he is someone who wore the colors of his profession high,” assures one of his colleagues, black T-shirt and short hair, invited by the court to tell the dramatic circumstances of his profession and the murder.

Like other police officers who were asked to testify, this crew chief said he was “haunted” by the images of the attack and tormented by “regret”. “I would have liked to have stopped the progress of the Kouachi brothers. I’m really sorry I couldn’t have done more, ”he sighs.

Periods of depression, recurring fears … It is also difficult for Ahmed Merabet’s family to silence memories of January 7th.

“Some days I manage to live with it. Others, I have the impression that it happened the day before and the pain is insurmountable, ”explains one of the sisters.

For her part, the police officer’s companion, Morgane, ensures that there are no words to transcribe “his feelings”. “The whole world remembers him as a dejected man. But I refuse to do that, ”the young woman loses her glasses and her hair.

There was a brief silence in the audience, then she went on to get the accused’s attention and tried to provide logistical support to the perpetrators of the attacks: “I’ve lost everything, my life as a woman, my hopes, but me stand against it for you. I stand and you won’t have my hate or forgiveness. ”

19 | U.S. health officials are committed to their integrity

White | The Senate leader of the Republicans promises “a transition in good order”.