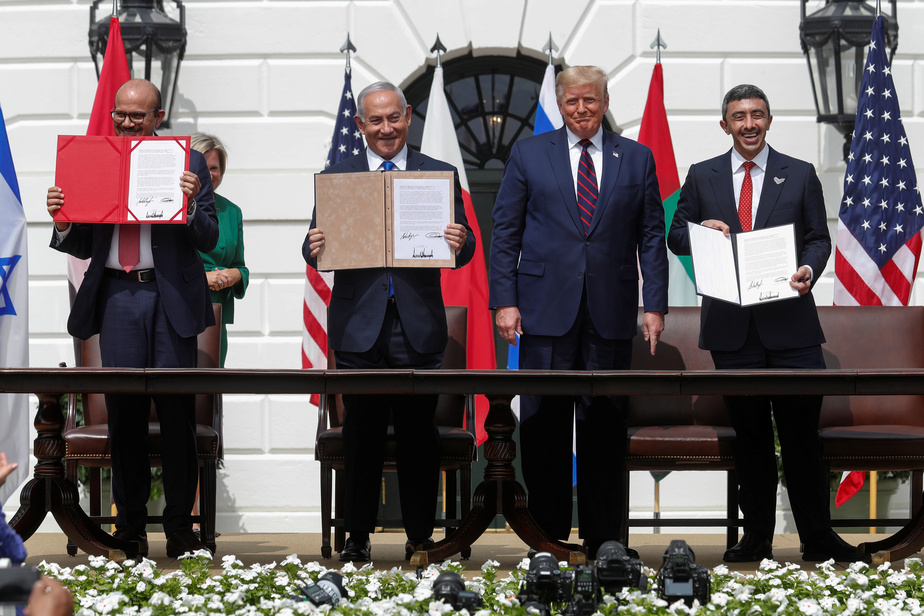 (Washington) Israeli Prime Minister Benyamin Netanyahu signed historic agreements on Tuesday under the auspices of Donald Trump, who wants to act as a “peacemaker” ahead of the US presidential election, which the Palestinians denounced with the United Arab Emirates and Bahrain.

“After decades of division and conflict, we are witnessing the dawn of a new Middle East,” the President of the United States said enthusiastically at a ceremony in the White House Gardens.

After claiming that “five or six more Arab countries” would “very soon” follow the example of the two Gulf states, he pointed to an even more ambitious target of “seven or eight”, “including the great” Saudi Arabia “if the time has come “.

Benyamin Netanyahu believed that the agreement signed in Washington was a “turning point in history” that could “end the Israeli-Arab conflict once and for all”.

In view of the aid provided despite the pandemic, he was not stingy in compliments to his “friend” Donald Trump before introducing his new interlocutors in Arabic “Assalamu Alaikum”, “this peace” to be with you “.

On the other hand, he was silent about the fate of the Palestinians, who were largely absent on Tuesday, even if the ministers of the Emirates and Bahrain recalled their cause.

UAE Foreign Minister Sheikh Abdullah bin Zayed Al-Nahyan welcomed “a change in the heart of the Middle East” and personally thanked Benjamin Netanyahu for “choosing peace and stopping the annexation of Palestinian territories” – too if the latter ensures that it is only a matter of a shift.

The Israeli Prime Minister signed bilateral agreements with the two ministers before a joint statement was initialed by the three men and the American President. But in the era of COVID-19, no handshake has immortalized this moment.

“End of the occupation”

These two Arab countries are the first to recognize Israel from Egypt and Jordan in 1979 and 1994.

The Emirates and Bahrain, Sunni monarchies, share with the Jewish state a hostility towards Shiite Iran, Washington’s greatest enemy in the region.

Many oil-producing Arab states have had tacit relations with the Israeli authorities for years, but this normalization offers a variety of opportunities, particularly economic opportunities, to countries trying to reverse the devastation of the pandemic.

“It is a first-class achievement,” assures David Makovsky of the Washington Institute for Middle East Policy, emphasizing that for the Israelis it “does not mean the same risk” as “accepted by Menachem Begin” when he left Sinai for Egypt, or Yitzhak Rabin when he was negotiating with the Palestinian Yasser Arafat.

The “Vision for Peace” presented by Donald Trump in January, which aimed to end the Israeli-Palestinian conflict, is anything but successful: the Palestinian Authority immediately rejected it and denied it to the US President. even the role of mediator, since he has chained the decisions favorable to Israel.

“Without the end of the occupation and the respect for the full rights of the Palestinian people there will be no peace, security or stability for anyone in the region,” warned Palestinian President Mahmoud Abbas on Tuesday.

The Palestinians condemn a “stab in the back” from those countries accused of making a pact with the Hebrew state without waiting for their state to be born. Several dozen Palestinian activists demonstrated in front of the White House during the ceremony.

The Trump administration has always said it wanted to shake up the region by bringing Israel closer to its Arab neighbors in a kind of holy union against Iran. These agreements outline this change of age and appear to push the Palestinian issue into the background, as the White House had hoped.

UAE Foreign Minister Anwar Gargash assured that “a strategic breakthrough” is needed as the “Arab approach of having no contact with Israel” has not served the aspirations of the UAE Palestinians “.

According to David Makovsky, “this is no longer the father’s Middle East, but a new region” where the Arab League extraordinarily refused to condemn the decision of the two Gulf monarchies.

“The Palestinians will wait and see what happens in the American elections, but when the dust settles they will have to reconsider their position,” said this former American diplomat.

For Donald Trump, who is aiming for a second term in seven weeks and has so far made little diplomatic progress with the voters, this is a recognized success even among his democratic opponents.

Since the announcement of the deal between Israel and the Emirates on August 13, followed by the deal on Bahrain last week, the republican billionaire’s camp has not skimp on superlatives to praise its action, which is worthy of the Nobel Prize winner. the peace.

However, differences have already emerged in the terms of the agreement with the Emirates.

The American president therefore assured on Tuesday that he would have “no problem” selling American F-35 fighter jets in the United Arab Emirates, some of which will be acquired for a long time.

Benjamin Netanyahu decidedly refuses this sale in order to preserve the military superiority of his country in the region.

Israel is refining for the Jewish holiday season

19 | In more than 5 million cases in Europe, Paris could tighten restrictions

Netanyahu has no intention of negotiating with Palestinians, says the opposition