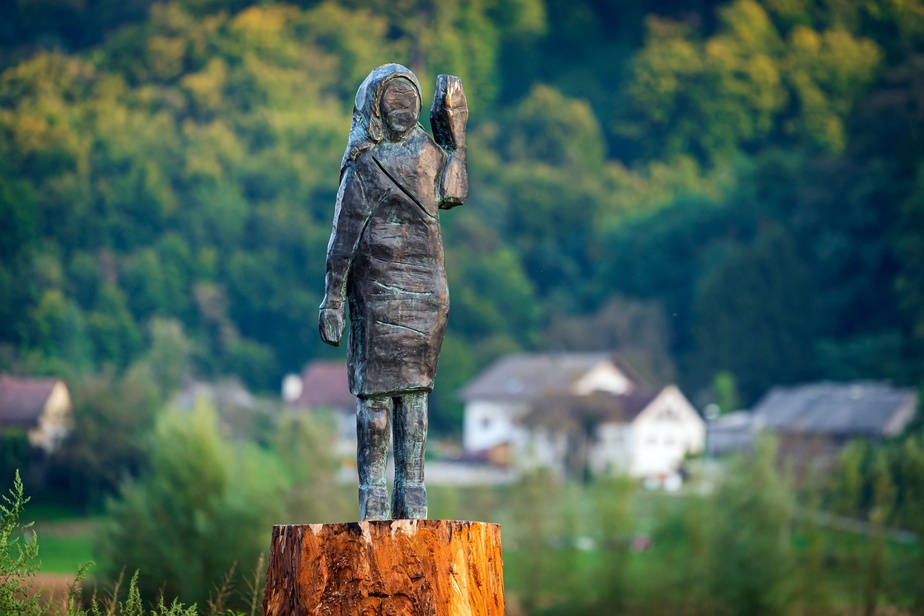 (Sevnica, Slovenia) A new statue of Melania Trump was unveiled Tuesday in the home country of Slovenia to the First Lady of the United States to replace the original that burned down in July and to commemorate the foreign origins of the American President’s wife. who defends immigration.

The bronze work of art is life-size and is perched on a tree trunk in the middle of a field near Sevnica, a town in eastern Slovenia where Melania Trump spent her childhood. She shows herself waving her hand, a gesture inspired by the pose of the presidential couple during the inauguration of Donald Trump in 2017.

This “caricature” was commissioned by an American artist, Brad Downey, who wanted to make it a “non-memorial to counter-propaganda”. He told AFP that he wanted to criticize the White House tenant’s policies, recalling that his own wife, Yugoslavian-born Melania Knavs, was an immigrant.

Last year he ordered a first statue from a Slovenian craftsman, Ales Zupevc, who was born in the same year and hospital as the First Lady, depicting the earlier model in her famous sky-blue dress.

Roughly carved from a tree trunk with a chainsaw, quickly compared locally to a scarecrow, it had been burned by strangers last summer. Brad Downey therefore ordered this copy made of a solid and monochrome material from a cast of the original.

Those present at the unveiling of the second statue could appreciate the “Melania cake” now being made by a bakery in Sevnica, a gourmet creation from a range of Slovenian products dedicated to the local child, including “Honey” Melania “and even” Melania slippers “.

Surface Swift, Microsoft has an event planned in a few days

Eric Trump had to testify about his father’s affairs

Over 30 Taliban killed in air strikes