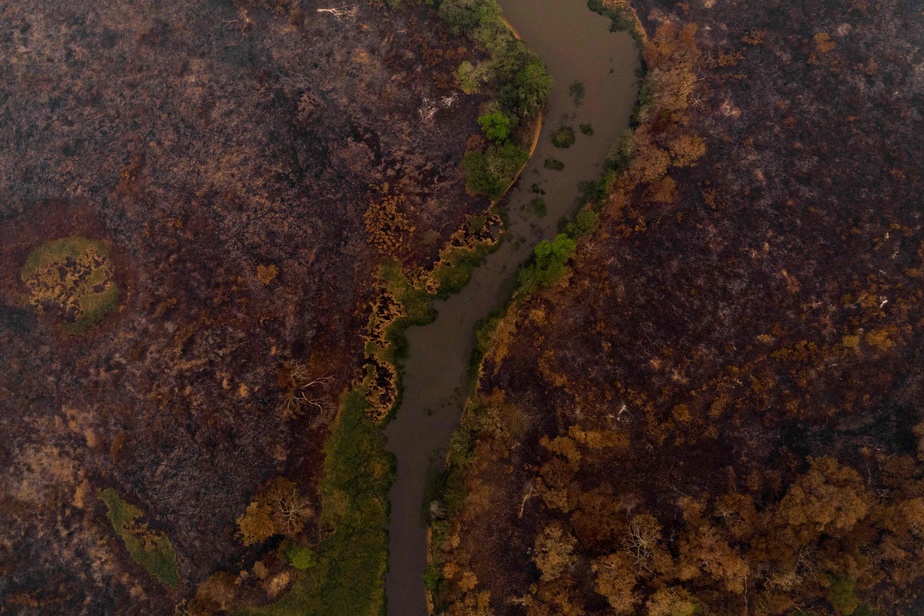 (Pôrto Jofre) Instead of lush vegetation and wildlife, it smells of burning, flames and desolation: the Brazilian Pantanal, a nature reserve, is ravaged by fires.

Felipe Maia, an employee of a hotel that made a living from ecotourism, tries to contain the progress of the fire by spraying with a hose one of the wooden bridges that allow to cross the rivers on the 150 km long Transpantaneira connecting Poconé with Porto Jofre in West of brazil.

The region is suffering from the worst drought in 47 years and many rivers are dry. Fires are relatively common this time of year, but this time they’re completely out of control.

Around 23,500 km2, almost 12% of the largest wetland in the world, which also extends to Paraguay and Bolivia, has gone up in smoke since the beginning of the year.

“Every day we pass this street and as soon as we see an outbreak of fire nearby, we spray the bridges to prevent them from burning in turn,” Felipe Maia told AFP a few meters away. of an area covered with burning hills.

“It’s sad. We had the pandemic that was going on in Brazil longer than expected and we thought we would have a good tourism season soon, but the fires are here,” laments Roberto Carvalho Macedo, tour guide who is part of this volunteer Is patrolling.

The satellites of the National Institute for Space Research (INPE) identified 14,764 fires in the Brazilian Pantanal from January 1 to September 13, an increase of 214% over the same period last year. The record for a full year (12,536 households) was largely broken in just over nine months.

Roberto Carvalho Macedo drives a boat on which an AFP team crosses the waterways of the Encontro das Aguas Natural Park, a large flood zone that begins where the Transpantaneira ends.

The green landscape of the river banks contrasts with the black and gray tones of the charred trees.

A wide variety of animals can usually be seen there: caimans, giant otters, anteaters, not to mention America’s largest cat, the jaguar.

Accompanied by a team of veterinarians and biologists, young guide Eduarda Fernandes Amaral looked for a fire-injured jaguar on Sunday, but the animal did not appear.

“All of the animals we could help were in very critical condition with burns to the bone,” she explains as she set up makeshift feed troughs with water and fruit. .

Animals that survive the flames can die of hunger or thirst.

Eduarda Fernandes Amaral admits that it is impossible to accurately calculate the number of animals affected, but assures that the losses are enormous.

“At least I hope these images will allow people to open their eyes and understand that the biodiversity we have here is unique. We have to keep it, it’s very valuable, ”she sums up.

These unprecedented fires are mainly due to the extraordinary drought: from January to May it rained half as hard as expected and many areas were not flooded as usual.

However, those skilled in the art believe that other factors need to be taken into account, in particular the substitution of native vegetation with outside plants intended for pasture and more easily burned.

Without counting the “feeling of impunity” that prevails “because of the lack of funds from public environmental protection agencies”, Vinicius Silgueiro of the NGO Institute Center of Life (ICV) denounced.

Many environmentalists criticize the environmental policy of right-wing extremist President Jair Bolsonaro, whom they blame for the rise in fires in the Pantanal and the Amazon.

The EU does not recognize Lukashenko and is preparing sanctions