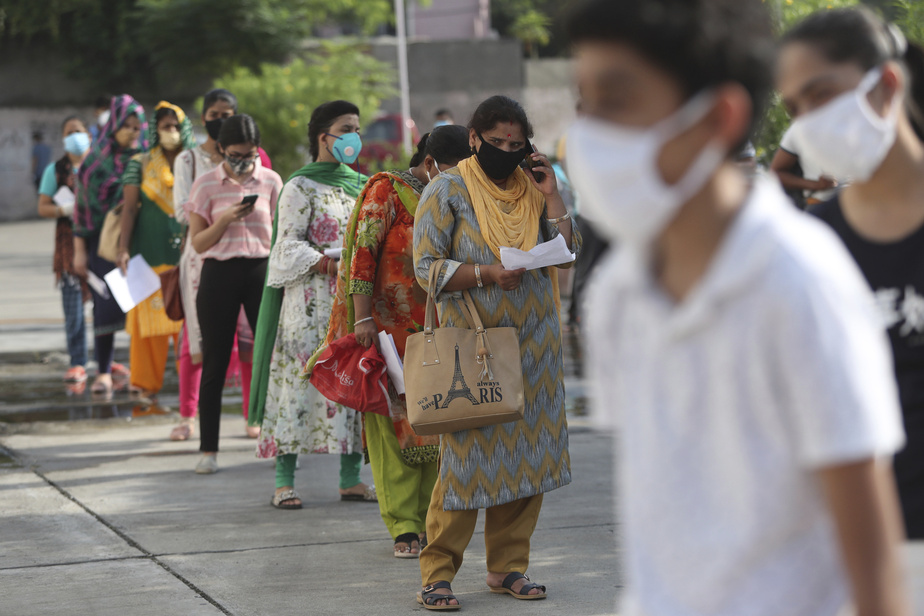 The second most populous country in the world recorded a million new cases in just eleven days and now has a total of 5.02 million carriers of the virus. It ranks second in the world after the US (6.59 million cases).

As of Wednesday, the number of new cases was over 90,000 and the number of deaths was 1,290, which is a record according to the Ministry of Health.

“People have let go of fear or are too tired to be careful. They want to go out and make a living now, ”Jayant Surana, a New Delhi entrepreneur, told AFP. “Now everything is left to the divine will”.

While it took India 167 days to hit a million cases, the next million were registered in just 21 days, according to the Times of India Daily, a much faster rate of progression than the US and Brazil. .

Then, just 29 days later, India became the third country in the world, after the United States and Brazil, to pass the 4 million mark.

As of September 5, more than 4 million people were infected. Two days later, it became the second country in the world by number of cases after the United States.

India, with a population of 1.3 billion, is currently testing around one million people a day, which many experts believe is insufficient.

They believe the actual number of infections could be much higher.

This hypothesis is confirmed by studies carried out in the last few weeks in which the antibodies against the virus present in the inhabitants of the megacities of New Delhi and Bombay were measured.

India’s Medical Research Council, which coordinates the government’s response to the crisis, said last week that its investigation found 6.5 million people were infected as early as May.

The death toll on Wednesday stood at 82,066 – a number that represents less than half of the 195,000 deaths recorded in the United States – many of which were not recorded correctly by authorities even in normal times.

India has one of the most underfunded public health systems in the world and some of the most densely populated cities.

Prime Minister Narendra Modi’s government imposed one of the toughest bans in the world in late March to help curb the spread of the COVID-19 disease.

Tens of millions of people were excluded from work overnight. Travel has been banned, shops and factories have closed, and millions of migrant workers have left the big cities for their villages.

Experts believe this has caused the virus to spread from large urban centers to small towns.

India’s GDP declined nearly 24% from April to June in the first quarter of its new fiscal year starting in April. This is one of the biggest declines among the world’s economic powers.

Containment has gradually been relaxed despite the outbreak of contamination.

Some classes in schools are slated to reopen on Monday, along with the Taj Mahal, India’s main tourist attraction.

“First there was some rigor in the containment, then some relaxation before it was completely lifted,” K Srinath Reddy, director of India’s Public Health Foundation, told AFP. non-governmental organization.

“This gave the wrong signal to the population, making them believe that we may have managed to get the situation under control and that now the economy has priority. The virus is now infecting more people and spreading deeper into small towns, ”he said.

Ayatollah Ali Khamenei | The war against Iraq showed that Iran “is determined to defend itself”.

19 | Johnson wants to save Christmas with restrictions in northeast England

Marine Le Pen aims to address “everyone” in 2022