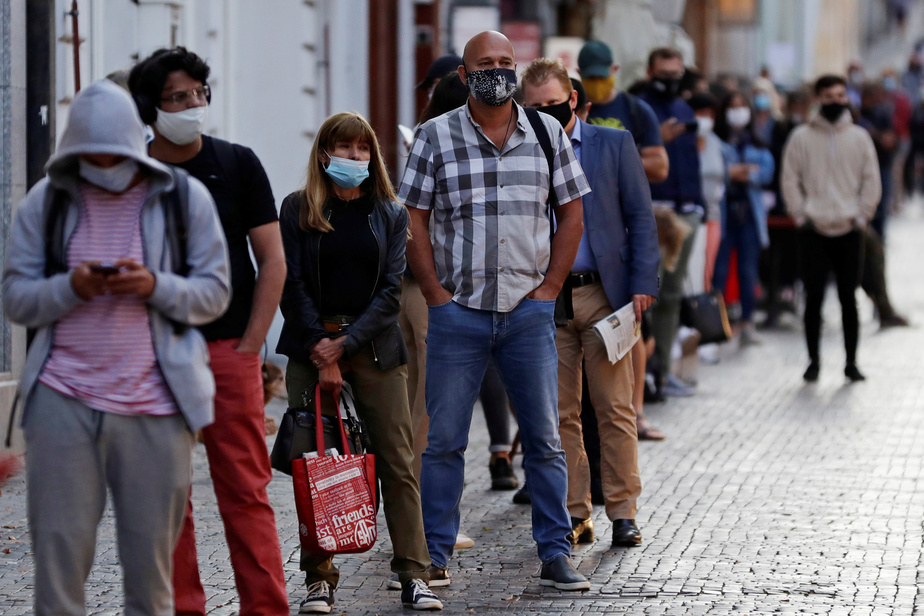 (New Delhi) India surpassed the five million coronavirus case on Wednesday, and one of the WHO’s six special envoy on COVID-19 warned that the pandemic was “worse than any science fiction” »was in its infancy.

European Commission President Ursula von der Leyen warned on Wednesday of the dangers of “vaccine nationalism” as Europeans faced the pandemic in dispersed order and the search for a vaccine mounted on fierce global competition.

“Some withdraw into themselves, others are actively working to destabilize the system […] Vaccination nationalism endangers lives, ”she stressed to the MPs.

India, the second most populous country in the world with 1.3 billion people, recorded a million new infections in just 11 days. It is the second country with the most confirmed cases (5.02 million) after the United States (6.6 million).

“People have let go of fear or are too tired to be careful. They want to go out now and earn a living, ”says Jayant Surana, an entrepreneur from New Delhi:“ Now everything is left to the divine will ”.

According to the Ministry of Health, COVID-19 has killed 82,066 people in India, but most experts believe the real numbers are much higher.

The pandemic has killed at least 936,095 people and infected nearly 30 million people worldwide, according to an AFP report from official sources. And one of the six World Health Organization (WHO) special envoy for COVID-19, Dr. David Nabarro, estimated that it is still in its early stages.

“This is much worse than any science fiction article about pandemics,” Nabarro told the UK Parliament’s Foreign Affairs Committee. “It’s really serious, we’re not even halfway there. We’re just getting started, ”he said, quoted by the Press Association agency.

“It is a terrible situation, a health problem so out of control that it is falling the world […] Hundreds of millions of small businesses are going bankrupt in a huge economic contraction that is likely to double the number of poor and double the number of malnourished people, ”he added.

The global recession is likely to be less pronounced in 2020 than expected, but the Organization for Economic Co-operation and Development (OECD) estimated on Wednesday the rapid and consistent response of the states that made it possible to limit the damage.

On Tuesday, WHO urged governments to make tough decisions to protect the most vulnerable and keep young people in school.

“Europe is entering a season when people will begin to return indoors. The pressure of infection will increase, ”said Michael Ryan, director of emergencies at WHO.

Compromises have to be made in order to keep both the youngest and the oldest in social life, he emphasized: “Most importantly, the return of our children to class or the opening of nightclubs and bars? “”

In Greece, classes resumed on Monday with a resounding fiasco: At the start of the school year, hundreds of thousands of masks were distributed to all schools in the country … but most of them were far too big for the students’ faces.

The filter masks used by caregivers are less suitable for the face shape of women and Asians, potentially putting these categories at higher risk of infection. A study published Wednesday found that conforming the mask well to the face is more important than its filtration capacity in terms of protection.

Border closings continue to leave castaways on the roadsides. On Wednesday, more than a thousand Jewish pilgrims – some for more than a week – were stranded on the border between Belarus and Ukraine after Kiev closed its border.

These Hasidic Jews came mainly from Israel, but also from France, Great Britain and the United States, and hoped to take part in a pilgrimage to Ukraine. According to the Belarusian Red Cross, they do not have “sufficient resources to meet their needs”.

In the United States, the country hardest hit by the coronavirus that has killed at least 195,961 people there, scientific experts have denounced the “unprecedented” pressure President Donald Trump put on the major American public health institutions during his election campaign.

“It is unprecedented that political power in the United States is interfering with the scientific functioning of these agencies,” said AFP William Schaffner, a professor at Vanderbilt University who also works with one of these agencies.

The scientific world and the democratic opposition suspect Donald Trump of speeding up a vaccine approved ahead of the November 3rd presidential election.

Sally makes the first victim in the southeastern United States