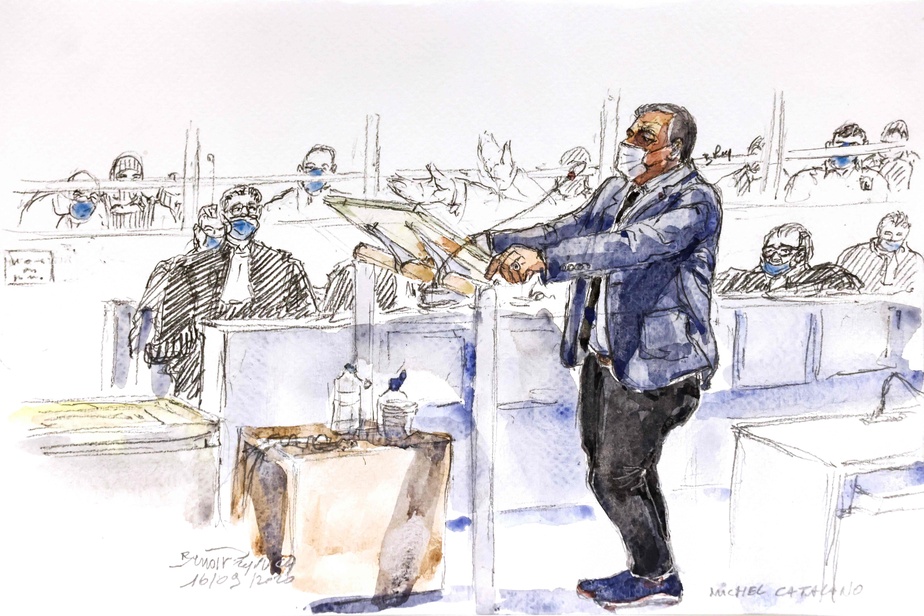 (Paris) “I stopped breathing”: The former employee of the Dammartin-en-Goële printing house, where the Kouachi brothers had sought refuge, told Parisian Assizes on Wednesday how he remained hidden “without moving” Eight hours under the sink, thanks to the “sacrifice” of his boss.

“It’s you, you have Kalashnikovs. Hide yourself, I’ll go ”. On January 9, 2015, Chérif and Saïd Kouachi, who had been tracked down since the murder at Charlie Hebdo’s headquarters two days earlier, just called the intercom at Michel Catalano’s printing plant in Seine-et-Marne.

Lilian, a young graphic designer from the company, agrees and decides “without hesitation” to hide under the sink. “Very well, the day before I was wondering if you ever came here,” he confesses in a weak voice in front of the special court.

“Curled up” in part of the tiny kitchen cabinet tucked near the bottles and maintenance equipment, it remains hidden “8:30 p.m.” until it is released around 5 p.m. by GIGN, which has just killed the two terrorists.

During the long hours of fear in his hiding place, paralyzed by the fear of being discovered, “I had only one point of reference: my ears,” explains the tense young man, checked shirt and hair. long hair in a bun.

In the next room he hears “scraps of conversation” between Michel Catalano and the hostage-takers and what sounds like “sermons”. Then the sound of the coffee machine and “footsteps” moving towards him.

Lilian has his first fear: he thinks of “an inspection”, of his “coat” and his “bag” that have remained on a chair.

“My heart has stopped beating. I stopped breathing. The smallest gesture I made could have opened the door because I was really glued to the door. Then I heard the door close and the steps go. I was relieved, ”recalls the graphic designer, a civil party in the process.

The relief was short-lived: in search of food for himself and his brother, who had been injured by a retaliatory shot by a gendarme, one of the Kouachi brothers approached “30 centimeters” from the cabin in which he was hidden. and left Lilian “paralyzed”.

“He washed his hands, there was water everywhere. I was just afraid that he would see running water and open the door, ”says the young man and bursts into tears at the bar.

Hours go by, his phone vibrates more and more with worried calls from his relatives, and under the sink Lilian “curls up even more”. When contacted by a GIGN officer, he pleads, “Hurry up”.

The attack is finally coming. The young graphic designer fears he will be killed in the exchange of fire and contradicts orders not to move and to crawl out of hiding.

Outside, Michel Catalano, who was eventually released by the Kouachi brothers, is “in total apnea”. Until this radio message: “Targets neutralized, hostage alive”. “I finally breathed there,” said the print shop manager in the early afternoon.

Holding his hands on the bar, Mr Catalano claims that he “took a lot that day to keep as calm as possible”. “My goal was not to find Lilian,” explains the entrepreneur.

Lilian joined his company at the age of 19 and is “friendly, reserved”. “I wish he hadn’t been here that much that day,” adds Catalano, his eyes cloudy and his throat tight.

His former employee paid tribute to him just as moved: “Michel sacrificed himself for me. Michel, he’s my hero, he saved my life. ”

Five years later, Lilian is still “afraid in the train stations, the terminals, the subway”. Michel Catalano has managed to restore his business, which was destroyed during the GIGN intervention, but lives “on credit”.

Fourteen people – three of them absent – are on trial until November 10 for providing logistical support to the brothers Kouachi and Amédy Coulibaly, the perpetrators of the attacks in January 2015 which killed 17 people and caused fear around the world.

“It’ll be cool at some point,” says Trump in California