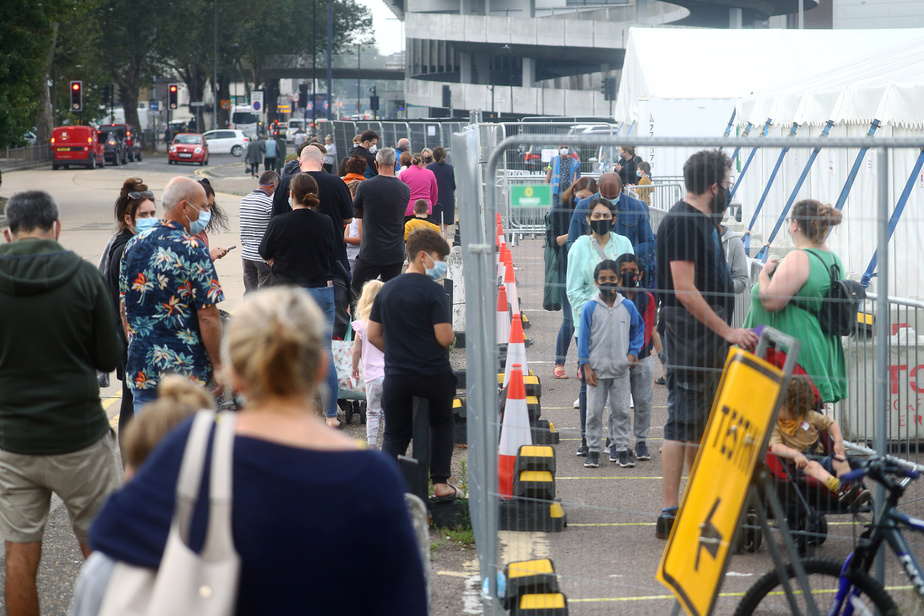 (Paris) The pandemic caused by the new coronavirus has killed at least 936,095 people worldwide since the WHO office in China reported the COVID-19 outbreak in late December. This comes from a report by AFP from official sources Wednesday at 7 a.m.

Since the epidemic began, more than 29,633,590 cases of contamination have been officially diagnosed and at least 19,787,400 people are considered cured.

However, the number of diagnosed cases only reflects a fraction of the actual number of contaminations. Some countries only test severe cases, others prioritize testing for traceability, and many poor countries have limited testing capacity.

The United States is the hardest hit country in terms of deaths and cases, with 195,961 deaths in 6,606,674 cases, according to the Johns Hopkins University figure. At least 2,495,127 people were declared cured.

China (excluding the Hong Kong and Macau areas) has officially counted a total of 85,214 cases (12 new between Tuesday and Wednesday): 4,634 were fatal and 80,437 people were cured.

This assessment was carried out using data collected from AFP offices of national competent authorities and information from the World Health Organization (WHO). Due to corrections by the authorities or late release of the data, the 24-hour increment numbers may not be exactly the same as the day before.

Update on the pandemic

Highlights, new actions, new reports: an update on the latest developments in the COVID-19 pandemic around the world.

Upper limit of 5 million in India

The pandemic is progressing at a rapid pace across India, crossing the five million mark on Wednesday after registering a million new cases in just eleven days.

India is the second most populous country in the world with 1.3 billion people and now has a total of 5.02 million people carrying the virus, just behind the United States with 6.6 million cases of COVID-19.

The President of the European Commission warned on Wednesday of the dangers of “vaccine nationalism” as Europeans faced the COVID-19 pandemic in a scattered order and the search for a vaccine the subject of global competition.

The pandemic caused by the new coronavirus has killed more than 936,000 people worldwide since the end of December. This emerges from a report that AFP produced on Wednesday at 7 a.m. from official sources.

More than 29.6 million cases of contamination have been diagnosed.

A new appointment is planned in Madrid

The Madrid region, the epicenter of the rebound of the COVID-19 epidemic in Spain, announced on Wednesday that it plans to include areas of the city or region with the greatest spike in contamination levels.

“Restrictions on gatherings of people and also on mobility” will be announced “by the end of the week,” said an official.

Mixed Outlook for the OECD

The global recession is likely to be less pronounced than expected in 2020, the OECD said in its economic outlook published on Wednesday. The swift and substantial response from states helped to limit the damage. However, the recovery is likely to be weaker in 2021 than in June.

The Organization for Economic Co-operation and Development (OECD) expects growth of 5% in 2021 after a decline of 4.5% in 2020.

A loss of $ 14 billion: This could cost world football the COVID-19 pandemic, which, according to the International Football Association (FIFA), is responsible for schedule disruptions, empty stadiums and other losses in television rights. .

The decline in the number of international tourists due to the pandemic resulted in a loss of $ 460 billion for the sector in the first half of the year, according to estimates by the World Tourism Organization (UNWTO).

The cause is a 65% decrease in the number of international tourists during the reporting period, which is characterized by border closings and restrictions on travelers.

The US Attorney General combines containment and slavery

ISIS is persecuted in Syria and growing elsewhere, the US says

Scenes of desolation in the Brazilian Pantanal

The EU does not recognize Lukashenko and is preparing sanctions